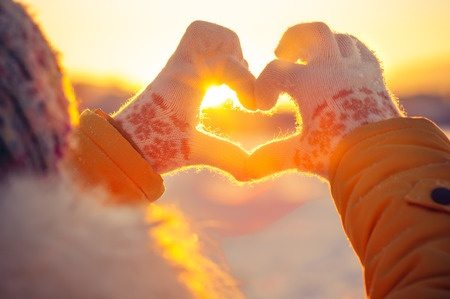 Whether we are going abroad or down the street, we can travel as ambassadors of love.

Each year on our wedding anniversary, Doug and I travel to a special destination to enter into a new sacred covenant with each other. This annual celebration provides an opportunity to reflect on the previous year, spiritually connect, and prepare our intentions for the coming year. We talk about changes that have occurred over the past year, what the highs and lows have been, and what the theme of our love story will be in the future.

Traveling as ambassadors of love, Doug and I visited Egypt two months after its revolution in 2009. There we witnessed how, despite limited media access, financial resources, and organization, the people had expressed their passion through social media and the Internet and begun a widespread revolution.

From the moment we made the choice to travel, we opened up to a positive flow of energy that guided us on the journey. Letting go of agendas and simply trusting the unfolding led to a series of spontaneous experiences, including having one of Egypt’s highest Muslim clerics personally chant for us. While visiting one of the oldest mosques in Cairo and quietly observing that there were few tourist groups at this spiritual site, we took off our shoes and I wrapped a scarf around my head and shoulders. Seeing us approach the front altar, the Muslim cleric came out of his office with his hand extended to greet us, asked who we were and where we were from, and then signaled us to follow him to a beautifully tiled and illuminated sanctuary. Then he pointed up at the Arabic inscription from the Koran that encircled the ceiling and began to melodically chant the words. Stunned by the experience, we opened our hearts to his spiritual message of peace that filled the space with love. Once he finished, he took both our hands in his and said, “Most Americans react in fear when they hear Arabic words. But Islam is a religion of love.” And then, in the most gentle voice, he gracefully blessed us.

The next day, we entered the Great Pyramid with the intent of repeating our marriage vows at the top in the royal burial chamber. As we climbed the narrow, steep stairs leading to the apex of the pyramid, Doug had to overcome his fear of heights and I had to let go of my fear of enclosed spaces. As we reached the top, we realized that we were the only ones in the burial chamber of the Great Pyramid except a guard. We held hands, gazed into each other’s eyes, and renewed our vows of soul-hearted partnership. I spoke to Doug first, saying, “I am asking you to give up holding back any part of yourself. I am asking you to fully participate in our relationship and in life without reservation and to be uninhibited. I am asking you for the deepest level of love, trust, and intimacy. I want you to see me as the beloved partner you have always wanted and to live your life with no excuses and no regrets.” As Doug was about to speak his vows to me, the guard came over to us and placed his hands on ours. When Doug finished, the guard joined in, blessing the union of our hearts in Arabic.

A final experience in Egypt traveling as an ambassador of love occurred when, from across a congested street in the center of Cairo, a little Egyptian girl, who was walking with her mother, locked eyes soulfully with me. Even though I will never see this girl again, I will always remember the powerful connection we shared—a soul connection that left a lasting impression on my heart. Such moments of shared love while traveling as an ambassador of love take us beyond our thoughts, into our hearts and souls. It has been said that ancient Egyptians believed that the stars in our eyes are reflections of the stars in the sky. When I looked into this child’s eyes, I knew it was true, because the light in her recognized the light in me.

By being open, flexible, and trusting the flow of love while in Egypt, we experienced more than the great pyramids, temples, and ancient wonders. We were constantly aware of channeling love into every interaction and leaving every space better for having been there.

By releasing all expectations and trusting the flow of our energies, even when it seemed like things weren’t going our way, we manifested our intention better than we could have dreamed.

One of the most significant ways to promote universal love is to learn about other people’s cultures and religious traditions, as Doug and I did in Egypt. We must let go of the ego-driven agendas and self-righteous positions that lead us to believe that we are separate from the rest of humanity, and instead widen our circle of compassion to embrace all living creatures. The more we see ourselves as one in universal love, the more we will dissolve abuse, racism, sexism, religious intolerance, and ethnocentrism. Traveling as ambassadors of love has transported Doug and I beyond our own lives, and made us more tolerant of other people’s cultures and religious traditions.

We are in the midst of a harmonic convergence of love that will change our world. When we share our abundance of love, time, and energy with strangers, it helps them feel worthy―and because too many people feel worthless, such kindness and generosity heals. Then, too, when banishing self-imposed limits and arbitrary barriers, we realize that there is nothing we cannot co-create, experience, and express. Traveling as ambassadors of love, our light, when directed positively, can help bring love, peace, and goodness to all people regardless of culture, country, or circumstances.