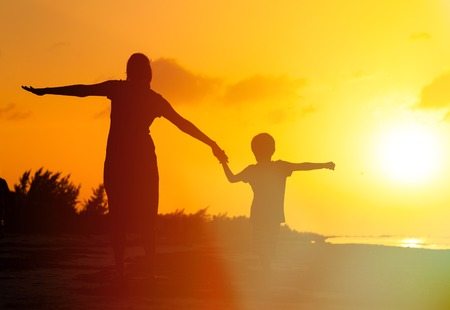 There it was again, the lump in my throat. I felt it every time I called or texted my son. And here it was showing up on the day when Tom’s baby, my first grandchild was being born. How long had I had this sign that there was an energy block? How long had I been carrying this weight on my heart? How long had I been unforgiving of myself?  Sixteen years almost to the day…the day when I told my son that I was leaving his stepfather and the second time I was putting him through a divorce.

Tom was two years old when his father and I divorced. So he didn’t grow up experiencing his parents being together.  But at sixteen, he would remember all of it. He would experience the break-up of his family, feel the pain of loss, and go through the upheaval that a divorce brings with it.

As I replayed the day I told him, a lump grew in my throat as did the guilt on my heart. Because I had kept everything running smoothly, Tom was shocked when I told him I was getting a divorce. Even though I reassured him that he would stay in the same house and go to the same school, I knew he was devastated. And there was nothing I could do to take away the pain that spoke to me through his eyes. All I could do was trust myself and breathe love into him.

I witnessed his free fall from the quiet, reflective, and happy young boy I knew. Tom’s grades plummeted for the first time in his school career. No one including me could stop the unraveling of an otherwise well-adjusted young boy. Yet I knew on a divine level that this was our journey together and he would be Ok.

I’m always amazed at the power of love and resiliency of the human spirit. I watched as love began to heal his heart and the resiliency of his spirit carried him through the rest of high school and into college. Through it all, he followed his heart and his passion. He received a full scholarship to study architecture and went on to a master’s program at a renowned university graduating in the top of his class. This is where he met the love of his life and soulmate.  Now he was awaiting the arrival of his son.

I have carried guilt for half of Tom’s life trying to make up for the choice I made. In doing so, I stopped asking anything of him, calling him out, or sharing my truth. I gave him a pass when he didn’t call me or answer a text. I made excuses when he remained disconnected. Ultimately, I punished myself creating my own prison of redemptive suffering.

And here I was out of the country when the text came that my grandbaby was on his way into the world a month early. When I first received the text, it felt like someone punched me in my stomach. “I was supposed to be there, to not let him down this time, and to be the best grandmother,” I implored to the universe. Again I felt the lump, but this time I began to release the tears and years of pain that came with them.

As I waited for the baby to arrive, I walked the beach, watched the horizon, and sat with my unresolved pain of repression…the repression of myself in Tom’s life. I had been playing small, taking whatever crumbs he gave me, and giving him a pass on how he treated me. As my daughter reminded me, this was a pass that I never gave anyone else including her.

Unacceptable my heart whispered.  You made a choice and you don’t have to keep punishing yourself for it. This stifling your truth, walking on eggshells, trying to always say and do what you think he wants has to stop. You must break this pattern so you don’t carry it into your relationship with your new grandbaby.  It’s time to forgive yourself and the choice you made.

I realized that the universe had given me just what I needed…the divine space of healing.  Had I been there at the birth, I wouldn’t have had the awareness, time and space to release the pain and heal my relationship with tom. My grandbaby deserved a fresh start, a new legacy without this residue, and pure love energy from me, his grandmother. His birth was the catalyst for me to release the past and bless his entry into our world.

I’m grateful for being blessed with a new grandson and all the healing that has taken place in preparation for him. Thank you Elliot.