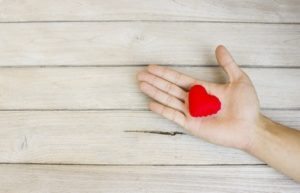 “Your entire life has unfolded for your heart’s ascension to love.”  ~ Bryant McGill

To facilitate a shift in our current consciousness, we must transcend fear, anger, and negativity, and ascend to the soul of love. We can do this by learning how to avoid reacting from these emotions, and instead connect to a higher power or divine source (whatever that means to us) through our hearts.

Like a periscope in a submarine, we must lift our gaze out of the shadowy aspects of human consciousness and obtain a more elevated, spiritual perspective. We must be clear that we are, first and foremost, spiritual beings navigating the sea of human processes, and we must trust that love has the power to open our hearts, raise our vibration, and dissolve negativity.

Sometimes, in order to assist someone we love, we are asked to step into a situation that is immersed in fear, drama, or negativity that has nothing to do with our energies or choices. We are called to transcend such negative energy and hold the sacred space for the vibration of love to prevail.

The CEO of her own marketing company, my friend Laura was immersed in several major projects and eight days away from launching a whole new division when her world was shaken. That day, her daughter, Natalie called to tell her that she had just broken up with her fiancé, canceled the upcoming wedding, and now needed to find a new home for herself and her young child.

Hearing the news, Laura felt like she had just entered an energy vortex. In the space of five minutes, she had gone from totally focused to spinning out of control. Taking a deep breath, she considered the impact that her choices would have on her highly sensitive three year old granddaughter, and immediately sprung into “mama bear” mode.

Laura wanted to not only support her daughter through this difficult separation process, but also to energetically protect her daughter and her exceptionally empathic granddaughter. As a spiritual midwife for her creative projects, Laura was accustomed to holding sacred space for her efforts to be birthed into the world.  Now, as a soul guardian for her loved ones, she knew she had to cast her energetic love net out even further, and create an even bigger space for her daughter, granddaughter, and the father of her granddaughter to move through this situation with ease and clarity.

Sustaining the divine space for this much energy, and supporting this many people, took a toll on Laura. She came down with a severe upper respiratory infection while in the midst of her company’s launch. This wasn’t a sign of illness, however; it was a sign of wellness! In order for her to be such an expansive sacred container, Laura’s body had to purge any negative energy that she had absorbed. This spiritual release was necessary to continue to energetically support herself, her clients, and most of all, her family.

Even while feeling physically and emotionally worn down, Laura continued to serve her clients and her family with love and compassion. Yet, it was becoming harder to stay balanced while she herself struggled with anxiety and concern for what would happen to her loved ones. After she broke down sobbing while working on a marketing project, Laura discovered that she could no longer contain the pain that kept rushing to the surface. She judged herself harshly for not holding it together. “I’m a spiritual warrior,” she said. “I’m supposed to trust and stay centered. I’m Ms. Positivity.”

At last, Laura decided it was time to call in her energetic support team. She gave herself permission to share her struggle with me. Holding the space of pure love and validating her experience, I said, “Be gentle with yourself. You are emotionally and spiritually stepping in front of the negative energy that is coming at your daughter and granddaughter. Like a divine shield, you are protecting them from everything that’s coming at them. You are their ‘soul guardian angel.’”

Instantly, Laura knew that her internal geography had shifted, and reset her energies. After receiving this reminder of her own truth, she pronounced, “I’m not weak, I’m vulnerable. I am a spiritual warrior, and I’m choosing to protect my daughter and granddaughter. This is what many of us do for our families.”

Several weeks later, her and husband helped move their daughter and granddaughter out of their old house. Before closing the door, she left a card on the kitchen counter for her daughter’s fiancé.  In the card, she and her husband spoke from their hearts, acknowledging their love for him and their gratitude for his part in bringing their granddaughter into the world.

Unbeknownst to them, this simple act of loving-compassion would soften his heart and break down the walls of fear and hurt.

As Laura sat outside the courtroom with her daughter, waiting for the custody hearing to begin, she locked eyes with her daughter’s former partner. He looked back at her and quietly said, “Thank you for the card.” In that moment, instead of projecting fear, she emanated love back to him from her heart.

They were called into the courtroom moments later. Laura whispered to her daughter that she was beaming love to everyone including the judge, lawyers, and both families. They high-fived, and walked into the courtroom together. As Laura went through the doorway, she visualized her energy field as so expansive that she had to duck under the lintel.

From the moment she walked into the courtroom, a place typically steeped in negativity, Laura filled the space with love. By opening her heart and focusing on love, she held the divine space for love to shift fear and negativity for the highest and best good of all.

Her efforts made all the difference in the outcome of the hearing. Positive resolutions were found to what could have been a custody battle. In the end, it was a win-win for everyone involved, especially her precious daughter and granddaughter.

After the hearing was over, the opposing attorney came up to Laura and said, “In all the years I’ve been practicing, I’ve never witnessed such radiating love in a place usually absent of it.”